How hard can it be? It’s just a fucking house, Regina thought as she took the staircase two steps at a time.

But once she started down the hallways on the upper floors, she realised that it could be very hard. Every damn corridor looked the same and there were many of them. The wood panelling and floors blended together to a homogenous brown mass as she walked and walked and walked. She opened doors to find strange little parlours, studies, children’s bedrooms, guest rooms, broom closets…

More than once, she stumbled on a locked door and got ready to pick it before a voice from inside told her that it was occupied.

At one point, she must have made her way to the kitchens, because two of the waitstaff stopped to ask if she was lost.

“I suspect I’ve accidentally made my way to a different house,” she said dryly.

The waiter laughed and said:

“Not quite yet. Go back that way and you should be able to find your way to the party.”

She thanked him, but it wasn’t exactly like she wanted to get back to the party again. After all, Enzo was there. The last thing she wanted to do was to creep back and tell him he was right and she needed his help.

Wouldn’t he enjoy that, she thought, fuming.

So instead of going back to the party, she resolutely took the first door on her right and made it… right back where she didn’t want to be.

She gritted her teeth and looked around for Enzo—it was better to get it over with—when a shadow fell over her and she looked up at the face of the last person she wanted to see. Well, besides Enzo.

“Thought I recognised you,” Doriano Montanari said with a cold glare. “What are you doing here?”

Gina straightened her back and glanced around quickly. The room was full of people. Ms. Antonini was there, as was a whole room full of potential clients.

“I don’t think we’ve had the pleasure of an introduction. Catarina Voltorini” she said, using the fake name Enzo had written on her invitation.

He shook his head and laughed bitterly.

“We both know that’s bullshit, Regina.”

“Goodness, have you already had too much to drink?” she asked. “Save some for later, Mr. Whatever-Your-Name is.”

“Need me to get naked?” he asked, getting uncomfortably close. “Maybe then you’d recognise me.”

“I don’t think anyone here would like to be blinded, so you’d better not,” she said through gritted teeth.

She tried to step away, but he blocked her path. He lowered his voice to a whisper:

“That’s not the tone you used to take when I got you naked.”

She took a step forward, forgetting all about the many people who might hear her.

“And this isn’t the tone you took when I beat your ugly face to a pulp, you disgusting piece of shit.”

“There she is,” he said, his voice was shaking with barely concealed anger. “The psycho bitch we all know and love. What are you doing here?”

“That’s none of your business.”

She shoved her way past him, making her way towards Enzo, when Doriano said under his breath:

Regina was pretty sure she blacked out. The only thing she could sense was the rush of blood in her ears, the white-hot rage that shot through her, her hand that curled into a fist and stormed towards his face. It only stopped just short of him, when a warm, steady hand curled around hers and drew her back.

“Catarina, there you are. I’ve been looking for you everywhere.”

Gina whirled to see Enzo looking down on her. He held her hand firmly and his blue eyes held a warning.

“You promised me that dance,” he said and then he let his eyes drift towards Doriano and lazily said. “You don’t mind, do you, Doriano?”

Enzo dragged her out onto the floor and put a hand on her waist, moving her around in lazy circles. His hand tightened around hers.

She muttered a few curses under her breath, not in any state to speak right now.

“I wouldn’t advice punching Montanari in front of all these people,” Enzo said in a low voice.

“What? You don’t want me to punch your buddy?”

His face grew surprisingly angry. “That man is not my friend.” He got it under control quickly and was more measured when he spoke again. “It’s more that if you do it, your reputation will be irreparably damaged in our social circle.”

“I’ve hurt him before,” she said. “Turned out pretty well.”

“But did you do it in front of a room full of his friends and family?” Gina went quiet and Enzo continued: “I thought not. Believe me when I say I would like nothing more than to let you punch him, but right now you can’t afford to do it. Punch him and you’ll never have another client of note again.”

Doriano was at the other end of the room, talking to a sleazy-looking guy. Every now and again, he looked triumphantly over at her. When Gina twisted towards him, she became aware of Enzo’s hand on her lower back, warm and solid. His eyes, when she met them, were calm. Ignore it, they said, keep your attention on me.

“What’s it to you if I ruin my reputation?” she asked.

“It wouldn’t help me if you did, and besides, I never wished you ill.”

“More like you don’t give a damn about me.”

His mouth softened into a smile. “If I didn’t give a damn, I would have let you do it.” 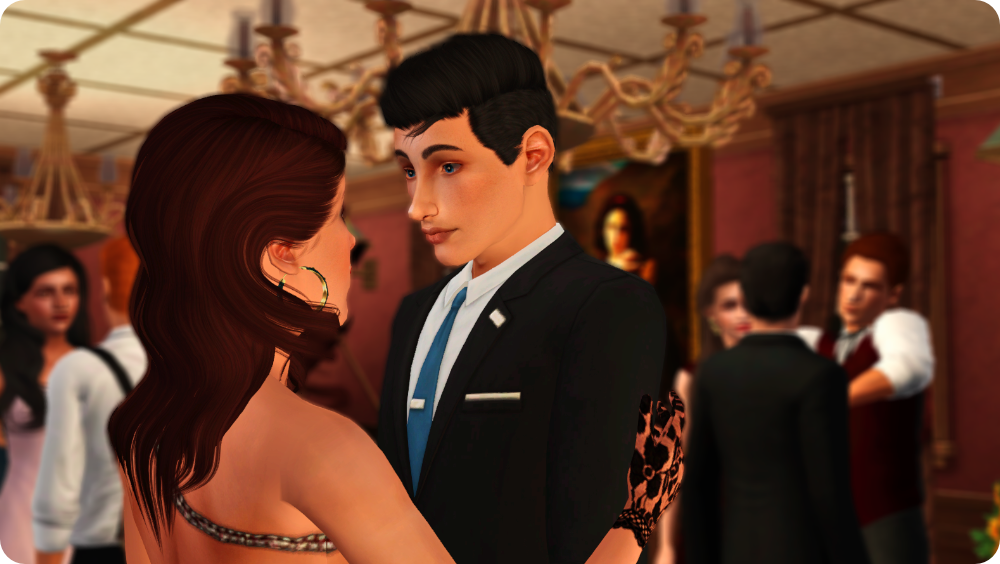 For a moment, she was transported back in time through looking into his friendly, blue eyes. He looked like himself, like he had before dumping her, when they talked and talked for hours about nothing in particular.

You’re being an idiot, she chided herself.

This was a fluke, or an attempt at throwing her off. He was playing with her, same as he had been then.

She looked away from his eyes and said:

“I did get lost.” When his mouth quirked into what promised to be an arrogant smile, she scowled and interrupted: “And don’t you fucking dare say I told you so. It’s not my fault this house is so ridiculous.”

“It is ridiculous. Let me help you.”

He offered her an arm and escorted her out of there. She noticed that he was looking at her as they walked through the front hall to the staircase.

“What?” she spat. “Do you disapprove because I don’t match the décor?”

“What did he do? Montanari?”

“You’re heading down the path to None of Your Damn Business City, Cavalcante.”

He continued: “I assume what he did was worse than me. You haven’t been that close to punching me yet.”

“He deserves it,” she said.

“I have no doubt he does. Nobody really likes him.”

“And yet, there he is at a fancy fucking party with everyone acting nice to him. No doubt, he’s finding new girls to fuck over.”

Enzo nodded, looking tired. They walked up the staircase in silence and then finally he said:

“That’s just how it is. The Montenaris have a great deal of weight in our circles.”

“Spare me the excuses and let’s find the damn painting.”

They were on the landing at the top of the staircase, with identical corridors stretching in both directions.

“I’d wager the painting is that way,” he said, pointing behind her. “It’s probably hidden away in a locked room until they’re ready to show it off to a select few people.”

“Well, then we had better start searching.” His eyes stayed fixed on her for a long time, and she finally asked: “Seriously, why are you staring at me?”

Enzo hesitated and said: “It suits you. The dress.”

“We’re going to find the painting. Now,” she said.

He repeated: “The painting, yes. This way.”

Author’s note: Hi guysssss, it’s yet another Saturday and it’s chapter time. I’ve been so damn excited about this chapter, if you can believe that. So excited, I didn’t even realise that this chapter is actually pretty short. Because of this, I decided to throw in some extra pictures. I had so many of that dance anyway, so why not! The dancing poses as well as the last set of Gina and Enzo arm in arm are of my own making. Since they didn’t come out too bad, you can expect to see those posted some time in the future – once I can be bothered to make them list compatible and such. Besides that, I don’t have much to say today. I’m really excited to hear your thoughts 🙂

Thanks for reading if you made it this far, and I’ll see you for the next post.