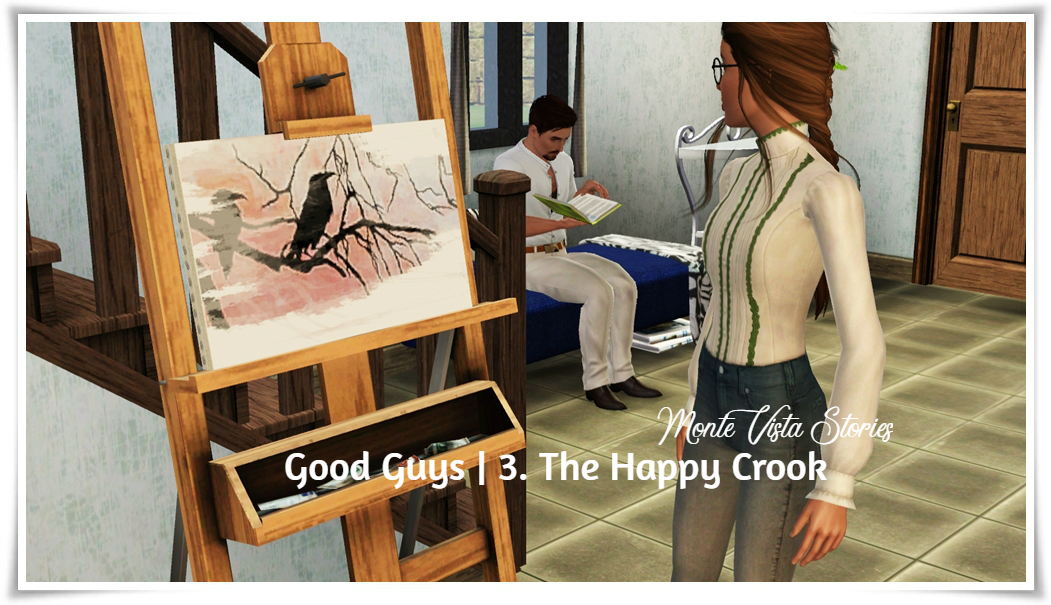 Vittoria smiled back at Carlo, who huddled under his parasol in the sun.

“You coming?” she asked.

“If you’re going to be on my case about the parasol again, I’m going to stay home.”

She rolled her eyes. “I was just teasing you a bit. It’s cute, really.”

“UV rays are no joke, Vittoria,” he said.

His voice so grave she couldn’t help but laugh, and his face softened into a smile. She forced herself to look away and get into the taxi next to Camillo. Since she had gotten him out of jail, he had warmed up to her, but he still kept a polite distance, except for those rare moments when he looked at her like that.

“Sunbather’s retreat,” Carlo told the driver as he got into the front seat. “As for payment…”

“No need for that,” the driver said, revving the engine.

Carlo looked like a king, sitting in the passenger seat with the parasol in his hands and a content smile on his face, and Monte Vista was his little kingdom. It certainly helped that he had been moving up the food chain at Good Guys Inc., lately. Even though he liked to pretend that Vittoria didn’t know a thing about his life of crime, little details slipped out here and there.

‘I got a promotion’, he’d say or ‘We’ve been working on this case for a while and we’ve finally had a breakthrough.’

She always knew what he meant.

The taxi could only take them so far, and to get the rest of the way, they had to take a path that was lined by squat trees and dry grass. Camillo suddenly smiled and yelled:

“First to the beach gets a free drink.”

Then he ran off, and Carlo set off after him, parasol up. Vittoria jogged after them.

“We always raced down this path when we were kids. With your mother,” Carlo said when she came up next to him. “I mean, without the drinks part. She wouldn’t let us drink.”

It wasn’t hard for Vittoria to imagine her mother enjoying this. She could practically see her, racing down the lane with her long dark hair streaming behind her and laughing infectiously. The part that was hard to imagine was Lucia being responsible enough that anyone would let her babysit.

It was best not to think about that too much, Vittoria decided. A tried and true technique for dealing with her mother was to pretend that she didn’t exist.

She changed into swimwear, let down her hair, and laid back to relax. While Carlo took a swim and Camillo read, she baked in the sun and looked up at the soft white clouds and bright blue sky. She didn’t have much experience with moments of peace and happiness, but she thought this might be one.

Then suddenly, Carlo appeared in her field of vision. She sat up.

“I might have found you a place to live,” he said.

And this might be what it was like having a happy moment ruined. She got up from her towel and followed Carlo away from the other beach guests.

She couldn’t hide her disappointment. Of course it was bound to happen, but it was so sudden that it seemed like another attempt to keep her at a distance. And she thought they had made progress.

“So, where are you shipping me off to?”

“It’s not like that. You can stay if you don’t like the place, but there’s a farm outside town. The company… obtained it. It won’t cost you anything, I’ll sort it out.”

“Sounds great. And I mean, if you want rid of me…”

He put a hand on her shoulder, the already intimate gesture made more so by her bare shoulder.

“It’s good for Camillo,” he then said suddenly, drawing his hand back.

But she moved closer, a little closer than was polite.

“I think it’s good for the both of you, honestly,” she said. “I bet the house has never been cleaner. What will you do without me?”

“We should go see it,” he said. “The farm. I think you’ll like it there. Should be plenty of inspiration for sculptures.”

He took a step back, and he was the king of Monte Vista again. Untouchable. Vittoria nodded; she couldn’t muster a smile.

The farm was lovely, if a little old. The walls and woodwork needed a coat of paint, and there was a large plot of land with apple trees, lettuce, and pepper. Vittoria had never been one for gardening, but she almost had to get used to it now.

“It’s a lot of land for someone who’s never done gardening,” she said as she walked up to the house.

“We’ll give you a hand,” Camillo said. “We’ll install some sprinklers, help with the harvest. It’ll be great.”

He stuck his hands in his pockets and strolled around the house, whistling to himself. Meanwhile, Carlo stood still, and Vittoria had to will herself to walk. It was a very nice place, and a very big place for someone who had never had her own place. She should be excited, but the thought of leaving the brothers just made her sad.

It almost felt final, returning to the house. Dinner was quiet that evening, and afterwards she immediately started cleaning the entire house.

And then she went quiet, except for the little grunts of annoyance that Camillo had managed to mess the place up that badly. She got so engrossed in it, in removing every little spot from the melamine, that she only noticed Carlo’s presence when she turned. He was painting.

“I think it’s clean now,” he said when he noticed her eyes on him. “Actually, it’s cleaner now than it was when it was installed.”

Vittoria nodded and observed him putting away his paints.

He walked off to read instead, and she took the chance to look at his painting.

“This is really good,” she said before she could stop herself.

Carlo looked up. “Thank you.”

“I thought you said Camillo was the artist of the family?”

She should leave him alone. Everything about his body screamed for her to go away. Instead, she sat down in the sofa and kept staring over at him until it became uncomfortable.

Someone who hadn’t grown up around scumbag criminals might have shied away by now.

“Do you kill people?”

Carlo put down his book, put on his jacket and sat down at the opposite end of the sofa. He turned on the tv and turned the volume up high. Vittoria saw him glancing to the upper floor where Camillo was.

“I beg your pardon?” he said in a whisper.

“At your job. Do you kill people when you’re working?”

It didn’t look like he was lying, and the look of disgust on his face at the thought put her at ease.

“What would possess you to ask that?”

“When I got here, Camillo told me that you were forced to start a life of crime because you lost everything. And now you’re working hard with Good Guys Inc. so the two of you can get by.”

She scooted over on the sofa, ignoring his squirming.

“I asked because I want to make sure you don’t enjoy killing. I’ve met a few people like that, and they’re never good company. No, it’s all the other things you like, isn’t it? You’re a criminal because you like it.”

He narrowed his eyes. “You think you know more about my situation than I do?”

“You know very well that you like it,” she said, keeping her voice low. “You like the job, and not just the money you make. You like the work, the lifestyle. And you don’t want Camillo to know, and you don’t want me to know. But I can tell. You’re a talented artist, and Camillo confided in me that you can cook as well. With all those talents, all those opportunities, why would a man choose crime? Especially when his dad disapproved.”

He didn’t say anything, and he didn’t have to.

Maybe he thought that would sting, pierce her armour and hit a weak spot, but Vittoria laughed.

“My dad loved the bottle and nothing else. He also had people killed if they looked at him funny, so no, you don’t remind me of him.”

“Is that why you ran? Because your old man is a psychopath?”

She stood up. “He’s dead, remember? Excuse me, I’ve got to pack so you can get rid of me.”

She darted up the stairs, ignoring him.

Feeling lost? If you’ve forgotten previous chapters and need a recap you can find my recap page here. Be aware that it contains spoilers for the story.

Hey guys, here we are again, new chapter, new things happening 🙂 I really enjoy writing Carlo because of the discrepancy between the description of the household and his traits/wishes. It says the two of them were ‘forced into a life of crime’ because they were ruined and lost their house. But Carlo has the Evil trait, and his lifetime wish is to become a master thief… that doesn’t seem like a man who was unwillingly thrust into a life of crime to me.

Anyway, I hope you guys are doing well. I’ve started back up at uni, and it’s a bit draining. Thankfully I’ve got a fairly impressive backlog of written chapters to keep this going 🙂 Until next time.